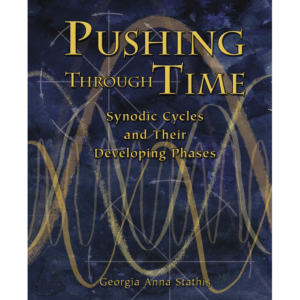 Have you ever wondered where an idea, a trend, or a political thought process begins? Is it something totally new, or is it an idea that hearkens from the past? Georgia Stathis, an astrologer since 1977, specializes in looking at patterns that evolve over time. In her new book, Pushing through Time, she explores historical patterns of the outer planetary conjunctions known as the synodic cycles. Jupiter conjoins Saturn every 20 years, while slower cycles as the Saturn/Pluto conjunction conjoining every 33+ years are different than even longer conjunctions like the Uranus/Neptune conjunction takes 172+ years. Each pairing and the planets involved in that pairing help identify the delineation.

For example, Saturn/Pluto can refer to the changing form (Saturn) of currency, wealth and values (Pluto). Uranus (the rebel and networkers) breaks through borders and boundaries melting them away when aligned with Neptune. As the faster of the two planets of each conjunction continues it s transit and always in relationship to the original conjunction, the industries or ideas associated with that synodic cycle births new ideas, overcoming obstacles, putting form into ideas that work, and explode onto the scene disseminating information as the cycle continues until the next return. Like the Sunflower that follows the light of the Sun then bows it s head to the earth to return the seeds, the synodic cycles do the same. Stathis ability of crossing platforms between the arts, economies, and business make this an interesting read for the astrologer interested in diving into material.

Her earlier work, Business Astrology 101, briefly touched on this idea (and many others) and provided the platform for this very detailed research that took another 20 years!