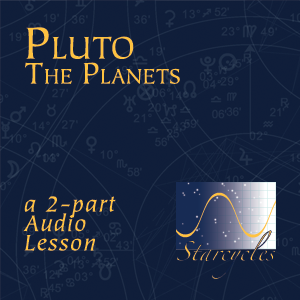 Pluto is the planet of choice because Pluto, when it is hitting the chart, requires a person to make a huge change in one’s life.  Pluto takes no prisoners and will require some sort of sacrifice – giving up ‘that thing we believe we cannot live without’ as well as making us look inside at our own dark shadows that terrify and keep you from becoming fully self actualized. It is always a choice.  For those born at certain ages, transit Pluto will square their natal Plutos (a once in a lifetime event) at various ages. Since Pluto’s orbit is so elliptical, these events are radically different. For example, those born in 1913 had their Pluto square Pluto in their late fifties, whereas those born around 1980 to 1983 are going through Pluto square Pluto in 2020 to 2023. This once in a lifetime opportunity asks that the individual  look deeply at all the secret, hidden fears that keep them from having a fully actualized life. This recording from the archives attempts to capture the essence of this cycle.  This recording is part of the Myths and Signs of the Zodiac series.