Whew!! We made it into the new year. The experience of this last year is a once in a lifetime opportunity to change those things that for so long all of us tried to change, were wary to change and even fearful, but, in the end, pushed us through the birth canal of change. There is a drawing I often use in my workshops. It looks like two funnels whose skinny ends are in the middle and connected thus leaving the two open ends on the left of the picture and the right of the picture. The peduncle is the very narrow passageway in the middle through which everything must pass to move from the past to the future. 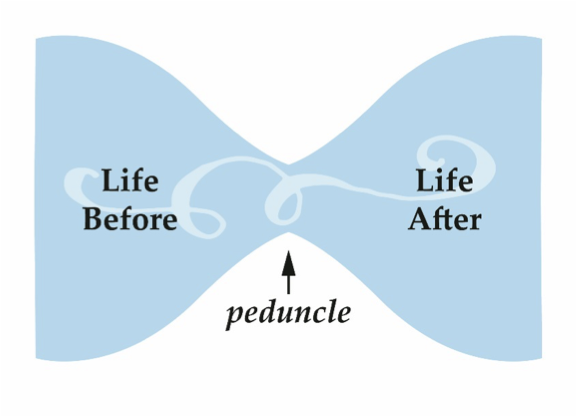 For a little insight, a peduncle is a narrow passageway or tube through which nerve endings are tightly crammed but still carry important messages to say, the brain. In a flower, a peduncle is that stem that isn’t that pretty, but is the key passageway for all the life-giving juices coming from the earth which are passed up to the flower for it to bloom. The challenge of any peduncle is that, in fact, it is such a narrow passageway that we can only take with us that which is our most vital essence. And, the other part of the peduncle, is that no one else can pass through it with you. You just take what you most value, yourself.

Much like a baby being pushed through a birth canal, in many ways, we are that theoretical baby now facing survival as you are pushed through this narrow passageway. Everyone always talks about the mother’s health when describing birth, but does anyone ever really think about what that baby is going through? Rick Tarnas spoke about this in one of his lectures and said that the baby is going through a Saturn process. Saturn is constricting and narrow and is the embodiment of fear and birth is Pluto the new experience of transformation from one consciousness to another.

So here we are in a brand-new baby year. Yesterday January 3, Mars finally returned to the spot at which it went retrograde on September 9, 2020 and that is a good thing. Mars has been retrograde often getting people distracted from their purpose and their goals, where misplaced anger and aggression has gotten nowhere except for destructive behaviors. Now that Mars is back on track, it might take a couple weeks to get going again, but at least it is moving forward to more decisive actions and events.

Watch January 6 to 7 for a long-drawn-out day as Mars enters Taurus — watch Congress’ discussions on the outcome of the electoral college. It also happens to be Epiphany when the Eastern Orthodox church celebrates Christmas as Jesus was presented to the Magi. I think it is interesting that on this same day Congress is ‘discussing’ outcomes with Vice President Mike Pence at the helm of this discussion and prior to this writing, I am sure with Mars having been retrograde there have been ‘issues’ regarding procedures. Juicy stuff to watch.

Mars in Taurus can be slow and languid — so who knows whether January 6 is short or long and drawn out — with Mars in Taurus, I am betting slow, slow, and slower. By Friday night, however, Mercury (Communications) enters Aquarius, its favorite place to be along with Venus in Capricorn. Get ready to get a lot more done. You finally finish and achieve some of those goals set over the course of these last weeks. Now the possibility of completion lies ahead and can be completed over the course of next few weeks. Casting out the ‘fear’ that keeps you rigid, stiff, and unbending is key. Think before you decide and if it doesn’t feel ‘quite right’, then wait. Use the good part of Saturn, where you make your lists of what is doable and take it one day at a time.